Buffer classifications (or Ignored Ground in the USGS Lidar Base Specification) are those classes that are assigned to LAS points that are within a user defined-distance of breaklines. Points that are assigned to these classes are excluded from the surface when using breakline enforcement. Typical distances used are one quarter to one half the nominal pulse spacing of the point cloud, but may be as much as the nominal point spacing. Depending upon the buffer distance, the resulting enforcement will result in the surface tapering to the breakline, instead of a dramatic vertical sliver in the surface.

Technical feasibility drives the main need for a buffer around breaklines. On many occasions points may fall on or very close to a breakline. When a point falls on or close to a breakline, and has a slightly different elevation value it can create a condition for a potential errors in the TIN generation as a TIN does not allow for two different vertical values at the same XY location. The closer in XY that two elevation values are, the closer in elevation they must be. Otherwise, the TIN generation fails as the slope of the triangle approaches infinity resulting in a failure to create the triangle for the surface at that location.

Points can be classified into a buffer class using the Classify By Features Point Cloud Task (PCT). This allows the classification of points using a spatial relationship with features. Specifically applicable, to buffering, is the “Within a distance of” option.  Again, the distance would usually need to be one quarter to one half the nominal pulse spacing of the point cloud.

To make use of the buffer class during the enforcement of breaklines there is an option in the Breakline Enforcement dialog to designate which class will be used as the buffer class. This tells the software not to use those buffer classes in the TIN generation. 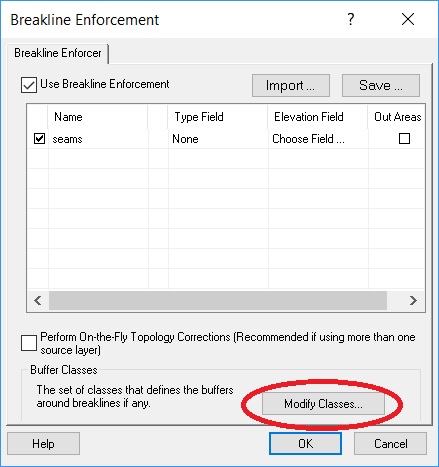