Moving objects routine classifies groups of points that are captured from moving objects. It can be used for mobile laser data sets. The routine requires that data from multiple lines or scanners is available.

The routine classifies groups of points that are captured at one moment of time and at another moment of time, when the area was captured by another scanner or in another line, there are no points at the same location but point from behind the moving object.

The routine requires that points have been assigned to groups using the Assign groups command or corresponding macro action. 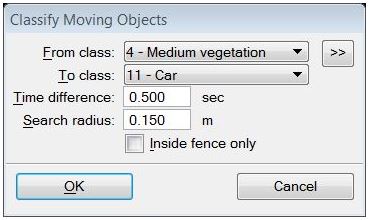