In the GeoCue Command Dispatch System (CDS) the Processing Priority (or simply priority) determines the processing order of subtasks that could otherwise process in any order. Priority in the CDS is a floating point number ranging from 0.0 to MAX_FLOAT. Higher values are considered higher priority. For example, assume that two LIDAR Orthos are in the CDS dispatch queue and that these ortho subtasks have priorities of 1.0 and 7.3. Also assume that only one machine is available for processing. In this simple scenario, the ortho with priority 7.3 will be processed prior to the ortho with priority 1.0.

Subtask priority is computed in GeoCue as subtasks are entered into the dispatch queue. Priority is set at three levels in GeoCue: 

These priorities are combined in a priority weighting equation to arrive at a single final priority value.

The ultimate priority of a subtask in the CDS is computed based on the individual priority settings for Entities, Project and Processing Group. The computed priority is scaled by priority weights that are set in Environment Builder and Dispatch Manager -> Configuration -> Options -> Priority . The parameters that are used in ultimate priority computation are given in the following table.

It is important to note that the Command Dispatch System will order the processing of subtasks based on the final computed priority of the subtask. Thus, depending on the priority parameters and weights, a subtask from a low priority project may ultimately process prior to a subtask from a higher priority subtask.

If clipping is not being used, the ultimate priority of a subtask is given by the formula of:

Priority Range Clipping are values that you can set to clip the maximum value of each of the partial priorities (entity, project, group) above. This provides more flexibility in setting up system priority schemes.

NOTE: Priority is global within the Command Dispatch System. For example, assume task A comprising 100 subtasks, each having priority 10 is dispatched. Sometime later, Task B comprising subtasks of priority 11 is launched. All of the Task B subtasks will move ahead of the remaining Task A subtasks due to their higher priority values. The priority for each subtask can be reviewed on the subtask pane of Dispatch Manager. 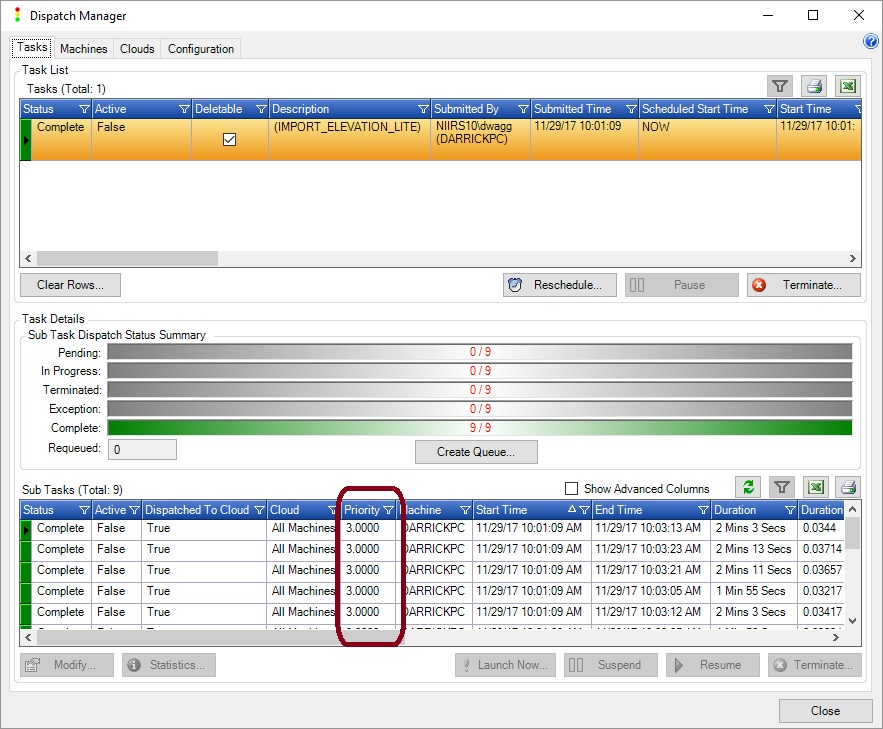