Configuring a Table of Contents (TOC), especially for a many layered project, can be quite time consuming.  In addition, there are many circumstances under which you would like to pre-configure an arrangement of the TOC for a select class of users (for example, a simple layout for QC).  GeoCue assists with this need by allowing you to save a particular arrangement of the TOC as a “Layout.”

Layouts are Project constructs within GeoCue; that is, a layout is always associated with a particular project.  This has to be the case since, in general, no two projects will have the exact same TOC.

When working in GeoCue, you are always within the context of a Layout.  This concept is so fundamental to GeoCue that the current Layout is listed in the Project title bar of the GeoCue client.  Until you create a specific named layout for a project, you will be working within the context of your own, unique “default” layout.

Your “default” layout is a private layout associated with your GeoCue login.  It can never be shared (it can, however, be cloned to create  a new layout that you can share).

Every time you make a change of the following nature to the TOC, that change is saved in the current layout:

You can save different configurations of the TOC by creating new Layouts.  To create a layout, press the Layout tool in the main TOC toolbar.

This will invoke the following dialog.  Press the New Layout tool (highlighted in red) to create the new Layout.

This will invoke the New Layout dialog.  Enter a Name for your new layout and (optionally) a description.  You can use any text string for the name (it is not case sensitive) that is unique within Layout names for the current project.   Remember that a layout is unique to a Project and thus “QC” in Project A is not the same as “QC” in Project B.

The Lock Project Layer to Top option ensures that the Project Layer will always be the topmost layer in your TOC.  It avoids the annoyance of having layers such as GeoAnalysis layers pop in above your project layer.

The Permissions section of the dialog allows you to control how other users in the current project can interact with this TOC layout.  Private means that no other users will see this layout when they bring up their Layouts dialog.

Published means that this layout will be available to other users within this project.  By default, all users with have Modify permission to the named layout.  This means that they will be able to change layout-stored items such as folder contents.

If you want to restrict other users, simply use the standard GeoCue permission system to do so.  For example, if you want to create a layout for QC users that shows only LAS layers in your project and does not allow the QC group to change the layout, do the following: 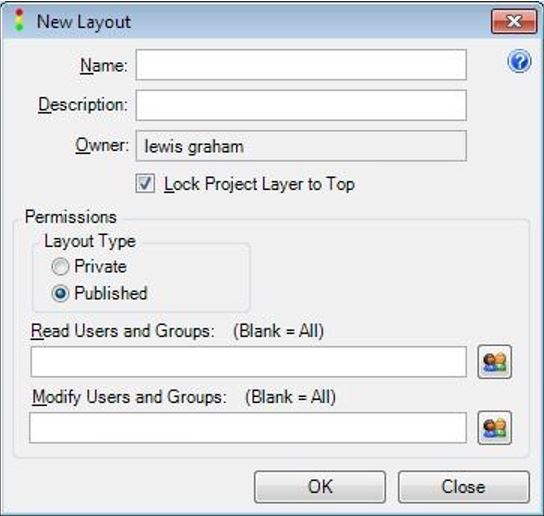 In general, you should always use Groups for various permission function in GeoCue rather than individual names.  This allows you to maintain logical groupings in one place (User Manager) when the group configuration changes.

NOTE – Users with Administrative privilege in GeoCue will always be able to access all layouts.

NOTE:  Users who do not have modify privilege to a layout will not be able to use the following TOC tools while in the layout:

They also will not be able to move any layers in the TOC.

Note that Layouts in GeoCue are dynamically updated in real time.  This means, for example, if four users in Project Madison are sharing layout “Great Layout”, every time a user (with modify permission to Great Layout) changes an aspect of the TOC that is stored in a layout, everyone using Great Layout will see the change, as it happens.  For example, if a user creates a new folder named Sources and moves SBET and LIDAR source layers into the new folder, all other users of same layout will see the changes as they occur.  This dynamic, real time layout capability makes a very powerful tool for organizing projects for specific classes of users.